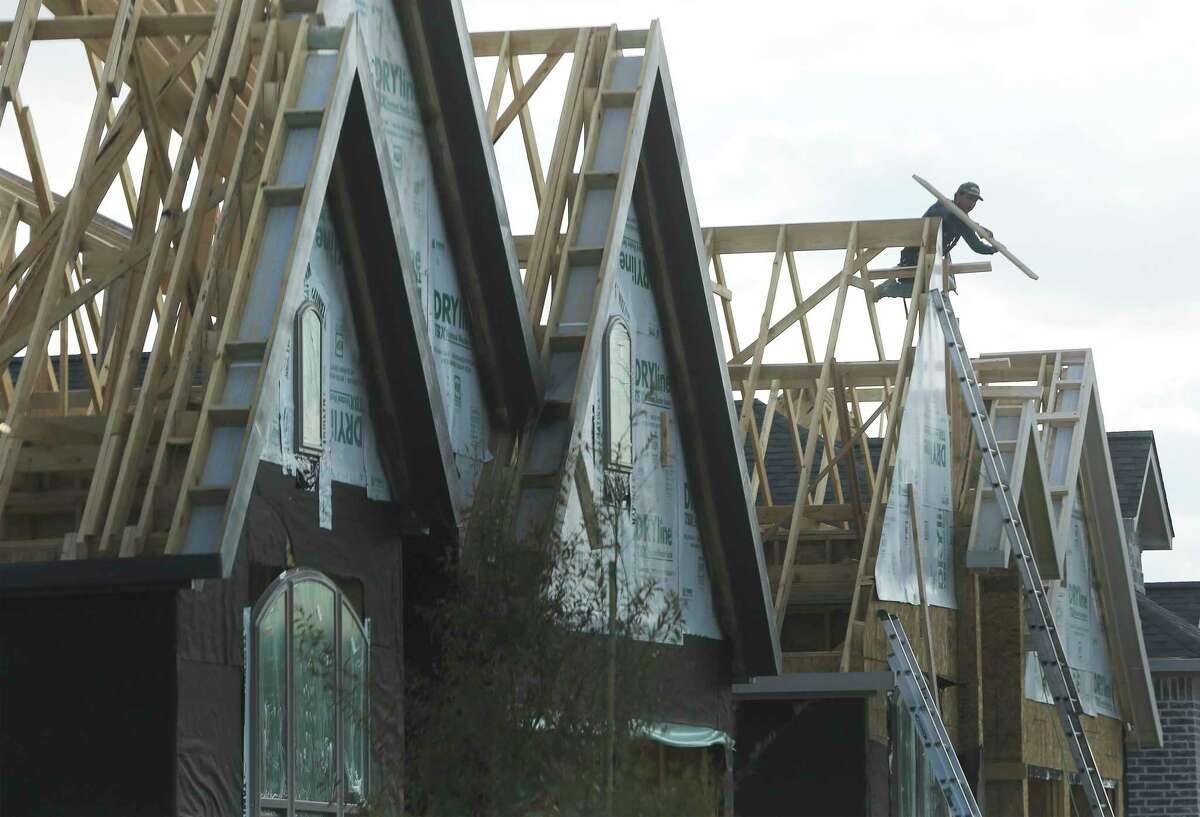 Deborah Longoria-Narro envisioned the one-story brick and stone house on a corner lot in the Cibolo Canyons neighborhood on San Antonio’s far North Side as her dream home.

“I’m 69 and I wanted one nice, final house to live out my final years,” she said. “It’s a beautiful little lot. Most lots don’t have trees. This one happened to have about 10 oaks on it. So I was just completely obsessed with the house.”

Longoria-Narro will never get to call the house on Colina Crest home. Builder Empire Communities abruptly terminated her purchase contract at the end of March.

She and Empire have different takes on what triggered the cancellation.

In a letter to Longoria-Narro, Jarves Warren, Empire’s sale vice president, cited her “dissatisfaction with the construction process” and “harassing calls to other homebuyers in the community” as reasons why it terminated the contract.

Deborah Longoria-Narro is suing home builder Empire Communities for canceling the contract she had for this house on Colina Crest on San Antonio’s far North Side.

Longoria-Narro called Empire’s reasons a pretext for placing the house back on the market for a much higher price. She agreed to pay $343,600 for the house; Empire relisted it for $425,000, she alleged.

When “Empire realized the property was more valuable, it kept Ms. Narro’s money and ousted her from her rights in the property,” according to a lawsuit filed against the builder last month.

On ExpressNews.com: San Antonio buyers are facing surging prices and a shortage of available homes

With home prices soaring due to the rising cost of building materials and the scarcity of labor and supplies, stories like Longoria-Narro’s are surfacing.

Prospective home buyers are learning the purchase contracts they signed give home builders significant say when it comes to canceling the agreements or forcing buyers to pay more than the agreed price.

It’s impossible to know how often builders invoke that authority. No one tracks that information, though National Association of Home Builders economist Paul Emrath said his organization is hearing “anecdotal stuff” that it’s happening more.

“We’ve had people mention to us that they are doing it more,” he said of home builders terminating contracts. “Practically everything they’re doing now is to cope with rising costs.”

Still, Emrath downplayed the phenomenon. It’s more common for builders to add price-escalation clauses into contracts or use “cost-plus pricing,” which essentially adds a markup percentage to a builder’s costs, he said.

A recent NAHB survey of home builders found that their building material costs have shot up 26 percent in the last year. Almost all of the costs are at record highs, said Emrath, vice president of surveys and housing policy research.

Meanwhile, shortages of many of those materials are more widespread now than at any time since the 1990s when the NAHB started tracking them. Lumber, wood panels, appliances, and windows and doors are just some of the materials facing shortages, builders report.

Rising costs for materials are contributing to higher prices for new homes. The median price for a new home in San Antonio was $247,000 in April, an 18 percent increase from a year ago, the San Antonio Board of Realtors reports.

In the San Antonio-New Braunfels area, the median climbed about 9 percent to $280,000 over that 12-month span.

San Antonio home builder Rialto Homes has been experiencing “unprecedented volatility” in the cost of construction materials and labor since the fall.

Rialto told some of its buyers last month that it was raising the price on homes they already had agreed to purchase in response to the higher costs.

Rialto informed buyers Rosalinda and Rigoberto Montero in a May 20 letter that the costs to build their four-bedroom, 4½-bathroom home in the Preserve at Mission Valley in New Braunfels had risen $75,799. They had agreed to a $653,000 purchase price.

The builder gave the couple the option of sharing the additional cost or canceling the contract. Rialto had agreed to absorb a third of the increased cost, leaving the Monteros on the hook for roughly an additional $50,000 if they chose to proceed.

“We were already kind of pushing up against our budget,” Rosalinda Montero, 49, said. She and her husband ultimately decided to walk away from the deal. The increase “totally blew our budget out of the water.”

Rialto, in explaining why it could increase the price, referred to an addendum in the Monteros’ sales agreement that compensates it for additional costs incurred if the the couple failed to meet timelines for making structural and “deco” selections for their home.

The Monteros entered into the sales agreement at the end of last year. The addendum specified the structural selections had to be done within 21 days of the sales agreement’s signing. Rosalinda Montero said it wasn’t until March 11 that they were scheduled for their first appointment — set for April 14.

“What really doesn’t make sense to me is that I never had control over scheduling those appointments with the design center,” she said. “They were exclusively made through their salesperson. So I kind of feel a little duped because I think they were dragging out the process to make sure that I wasn’t in compliance with those deadlines that were in the contract.”

Montero admitted she didn’t notice the deadlines imposed by Rialto. In bold letters in the addendum, it states, “Unnecessary delays in completing the selection process will extend the ‘completion date’; Purchaser may be held responsible for any increased costs occasioned by the delay.”

Montero’s niece’s contract with Rialto also was canceled after it notified her the cost of her home had increased by $40,288. Again, Rialto offered to cover a third of that increase.

“In our complete history as a homebuilder, Rialto has absorbed cost increases and honored the prices contemplated by the agreements with customers,” the builder told the Monteros. “Doing so today goes beyond assuming normal business risk and would be materially detrimental to the business and ultimately to you, as the final recipient of the goods being sold.”

Rialto co-owner Eyal Avnon denied this was simply a maneuver by the builder to capitalize on the white-hot housing market.

He didn’t know how many of its buyers received a letter similar to the Monteros’.

Rialto had not actually started construction on the house for the Monteros. The acre lot the couple chose originally was listed for $97,000. It now lists for $136,000, she said.

When the Monteros declined to pay the increased cost, that triggered a default under the sales agreement. Rialto said the terms of the agreement specified it could keep their $10,000 deposit in the event of a default. Rialto, however, refunded the entire amount in return for the couple agreeing not to take any legal action against it.

“We are not mad at Rialto, just disappointed,” Montero said. “We just wanted them to build our forever-home. We honestly thought that we were diligently meeting their expectations. We just wish they would have met ours.”

The Monteros have resumed house hunting and are noticing the higher prices from when they first started their search. They expect to list their current home this summer. They may move into an apartment until they can move into a new home.

The contracts builders present to buyers are similar to those used by car dealers and landlords. Known as “contracts of adhesion,” the terms are set by one party and give the other party little to no room to negotiate.

“These contracts are written in such a one-sided way,” said San Antonio attorney Kenneth Grubbs, whose practice includes disputes involving home builders. “The average consumer can’t fight them on the contract.”

If a buyer objects to wording in a contract, Grubbs said, the builder will simply say, “Go find another builder. We’re not accepting any changes.”

A Fort Worth-area builder recently cited a clause in one of its contracts — known as a “termination of convenience” — to cancel a deal. The clause did not allow the buyers to walk, however.

Aledo-based Kenmark Home terminated the contract with Dan and Danielle Ostrowski after it said he became too difficult and even combative in demanding changes and fixes while the house was being built, the Fort Worth Star-Telegram reported this month.

The Ostrowskis had agreed to pay $416,625 for the white-brick, four-bedroom house in far north Fort Worth. After their contract was canceled, Kenmark immediately put the house back on the market — this time for $526,900, or 26.5 percent more than what the Ostrowskis were going to pay.

Kenmark denied it canceled the contract to boost the price and take advantage of the fervent housing market. Skyrocketing costs for materials and the Ostrowskis’ refund contributed to the higher listing price, a Kenmark official told the Star-Telegram.

Empire Communities had similar terminology in its contract with Danielle Longoria-Narro, who was nearing a closing on a house in Cibolo Canyon.

Longoria-Narrro said her complaints included a crack in the concrete that stretched from one side of the house to the other. The builder presented her an engineer’s letter saying it was OK. She also said a vent hood in the kitchen was installed in the wrong place.

Longoria-Narro acknowledged she complained to a neighbor who was in the process of moving in, using an expletive to describe the “storm” going on over at her house. Thirty minutes later, she said, Empire representatives told her they were canceling her contract.

“I cried and cried and begged them” not to cancel, she said. “I even sent a note, a text message, to the guy who made the decision. He said, ‘No, we’re not going to change our minds. We’re canceling the contract. You’re not happy. You just make too many complaints about the house.’”

SA Inc.: Get the best of business news sent directly to your inbox

“Termination for a ‘bonafide dispute’ is an entirely new term to me,” said Genevieve Hébert Fajardo, a St. Mary’s University law professor. “And I don’t mean that like, ‘Wow, that’s interesting.’ Meaning, that doesn’t sound like a legitimate contractual reason to end a contract.”

She added she’d want to see the contract to know exactly how it allows one side to break the contract.

The reasons Empire gave Longoria-Narro are just “excuses” to breach the contract so it can sell the house for a higher price, said her San Antonio attorney, William Germany.

After Empire canceled, Germany said, an internet listing had the house priced at $425,000, or almost 24 percent more than the $343,600 that Longoria-Narro was going to pay.

“It’s a great futures market for a builder,” he said. “The way I’m seeing it, they are hedging their bets on these houses. If the market had bottomed out, they sure as hell would have…held her feet to the fire and made her pay $343,000.

Longoria-Narro and Empire attempted to mediate their dispute, but it contained a confidentially provision.

Clearly, though, they didn’t resolve their differences because she sued the builder for statutory fraud and breach of contract on May 24 in state District Court in San Antonio. She also wants to get back $12,500 she said she paid the builder.

“Empire should be made an example of to prevent it from defrauding consumers in the future and to discourage other national builders from doing the same,” the suit says.

The contract requires the parties to submit to binding arbitration to settle disputes. Longoria-Narro has asked the court to appoint an arbitrator.

Longoria-Narro has found another builder to construct a home for her near U.S. 281 and Borgfeld Drive, though she’s going to have to wait another year before work is completed.